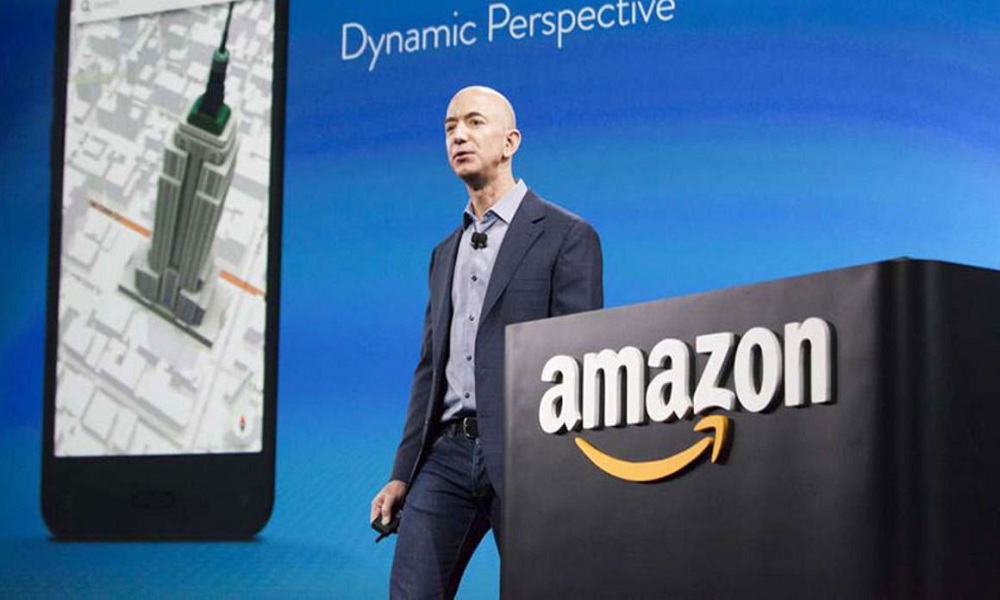 Amazon founder Jeff Bezos said Tuesday he would stand aside later this year as chief executive of the company he built from a startup into one of the world’s most valuable firms.

The world’s richest person based on his Amazon stake, Bezos said he will transition to the role of executive chair in the third quarter, handing over the CEO role to Andy Jassy, who heads Amazon Web Services.

The news came as Amazon reported a blowout holiday quarter with profits more than doubling to $7.2 billion and revenue jumping 44 per cent to $125.6 billion — as pandemic lockdowns caused online sales to explode around the globe.

In a letter to Amazon employees, Bezos said he would “stay engaged in important Amazon initiatives” but would pivot towards philanthropic initiatives, including his Day One Fund and Bezos Earth Fund, and other business ventures in space exploration and journalism.

“I’ve never had more energy, and this isn’t about retiring,” Bezos wrote.

“I’m super passionate about the impact I think these organisations can have.”

Bezos, 57, founded Amazon in his garage in 1994 and went on to grow it into a colossus that dominates online retail, with operations in streaming music and television, groceries, cloud computing, robotics, artificial intelligence and more.

His other businesses include The Washington Post newspaper and the private space firm Blue Origin.

His successor Jassy joined Amazon as a marketing manager in 1997 and in 2003 founded AWS, the cloud services division of the company which has been one of the most profitable but least-known units of the tech giant.

“He will be an outstanding leader, and he has my full confidence,” Bezos said of Jassy.

“Right now I see Amazon at its most inventive ever, making it an optimal time for this transition,” he said.

Wedbush analyst Dan Ives saw giving command of Amazon to Jassy as a “major step up in the clouds arms race with crosstown rival Microsoft.”

Bezos’s tenure at Amazon has been marked by a vast expansion globally and surges in profitability.

The company is based in Seattle, Washington, and is developing a second headquarters outside the US capital.

Amazon’s market value was some $1.69 trillion as of Tuesday, a tenfold increase from a decade ago, making it one of the world’s most valuable.

Bezos’s stake gives him a personal fortune worth an estimated $196 billion, slightly more than Tesla chief Elon Musk who had briefly captured the title of world’s wealthiest person.

Amazon has led other businesses by guaranteeing a minimum $15 per hour wage and has invested billions in Covid-19 mitigation — but it continues to face criticism over workplace conditions at its warehouse operations.

“The company Jeff Bezos started nearly three decades ago is under a cloud of scrutiny,” said Maurice BP-Weeks of activist group coalition Athena.

“Workers are speaking up, walking out, and organising against miserable working conditions … Small businesses are banding together to challenge Amazon’s anti-competitive practices.”

The company employs more than one million people worldwide including 800,000 in the United States.

The transition comes with Amazon and other large tech firms under heightened scrutiny from antitrust enforcers in the United States and elsewhere for their dominance of key economic sectors, which has become even more pronounced during the Covid-19 pandemic.

While Amazon has become the leading force in online commerce, Bezos has brushed aside criticism over its dominance of the sector.

He told a congressional hearing last year that Amazon accounts for less than four per cent of retail spending in the United States and has a “range of retail competitors.”

The latest quarterly results showed growth across all business segments including its cloud computing as Amazon has expanded its streaming media offerings and grocery operations.

Neil Saunders of the research firm GlobalData said Amazon has boosted sales during the pandemic “off the back of its superior logistics network,” but also faces growing competition.

“We maintain our view that Amazon will emerge from the pandemic as a bigger and stronger business,” Saunders said.

“We welcome the leadership change, if only because it will allow Jeff Bezos to focus more on innovation and new ideas.” 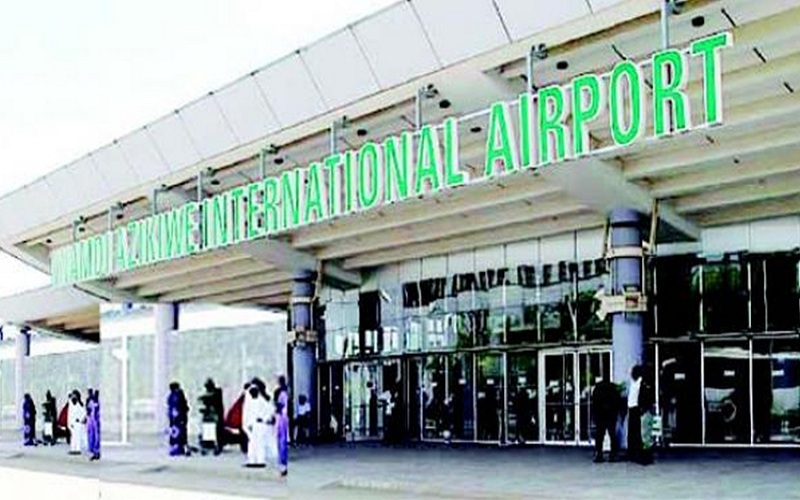 The Nnamdi Azikiwe International Airport Abuja has been awarded the Airport Service Quality (ASQ) Award 2020 as judged by their customers as the Best Airport by Size and Region (5 to 15 million passengers per year in Africa).

This award represents the Federal Airports Authority of Nigeria (FAAN) commitment to continuously improving customer experience across all Nigerian airports according to a statement by Henrietta Yakubu, General Manager, Corporate Affairs at FAAN.

“The recognition comes at a time when we are geared towards ensuring seamless airport facilitation with the opening of new terminals and upgrading of our current infrastructures across the board.

“Despite a turbulent year plagued by COVID-19 induced financial struggles, the authority has endeavoured to prioritize customer satisfaction while ensuring that health and safety remain topmost,” Yakubu said in the statement.

FAAN MD/CEO, Captain Rabiu Yadudu accepted the award on behalf of the Authority and restated FAAN’s commitment to ensuring the safety, security and comfort of passengers at all airports across the country. 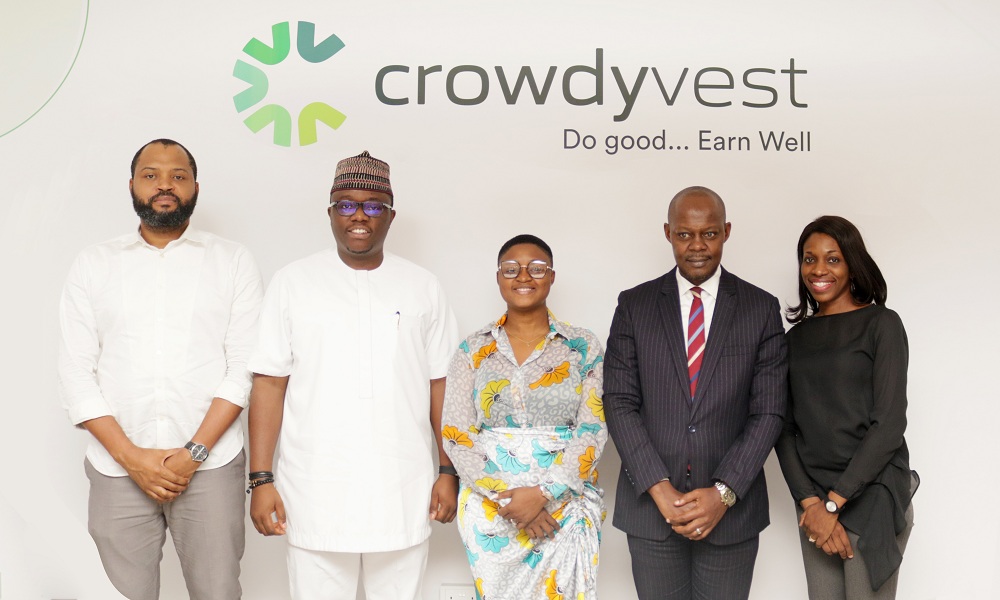 EMFATO Holdings (owners of Farmcrowdy and investors in Plentywaka) have announced the exit of one of its portfolio companies – Crowdyvest, following up on new investments into the startup to grow as a digital savings company in Nigeria.

Crowdyvest, an impact-driven fintech platform, which was launched just over a year ago, has over 10,000 members who have used opportunities on its platform to sponsor projects in Agriculture, Real Estate, Transportation, Health and Education sectors.

Previously led by its Co-founder & CEO, Onyeka Akumah but today, along with the new investment, there is a change in its management of the company, with Tope Omotolani set to become its new CEO.

Onyeka Akumah explained that the change in leadership will not affect the management and staff of Crowdyvest as they will all be retained but hinted that there will be a new way Crowdyvest will operate.

Following this latest development, the one-year-old startup will set its sights on becoming a leading digital wealth and savings management company focused on a closed-community savings model under Tope Omotolani’s leadership. 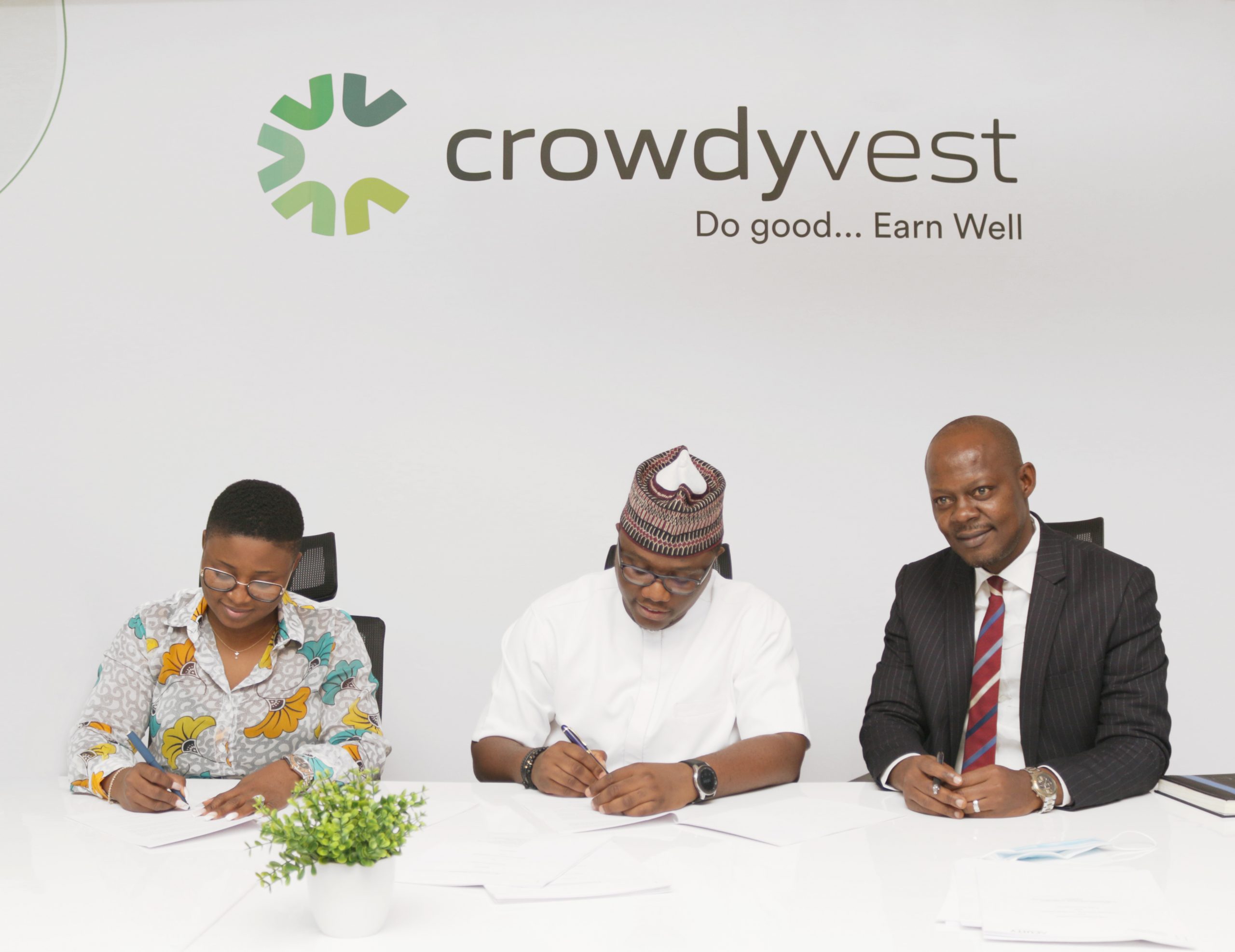 “I have taken this decision to move on as the CEO of Crowdyvest as a result of the new investment in the company which provides opportunities for proper scale in the coming months.

“Today, Crowdyvest will also exit fully from EMFATO Holdings and we are very happy about the new investors and to see how Tope will lead this business to new heights.

“Now, I can focus my energy on leading Farmcrowdy and Plentywaka as CEO of both companies into new markets in 2021.

“Tope is a strong and amazing leader and I see her leading Crowdyvest to become one of the go-to wealth management and digital savings companies in Nigeria within the next 3-5 years with her team.

“I wish her all the best and will continue to advise them on their journey when needed,” Onyeka Akumah said.

DigitalTimesNG understands that with this change, Crowdyvest will no longer be an open crowdfunding platform.

An all-new Crowdyvest led by Temitope Omotolani will enter the Fintech industry fully with the launch of the Crowdyvest Savings Platform which gives savings options to over 10,000 subscribed users.

This savings platform will give its users a variety of plans to help build a savings culture based entirely on their pace, so they can reach their life goals faster. 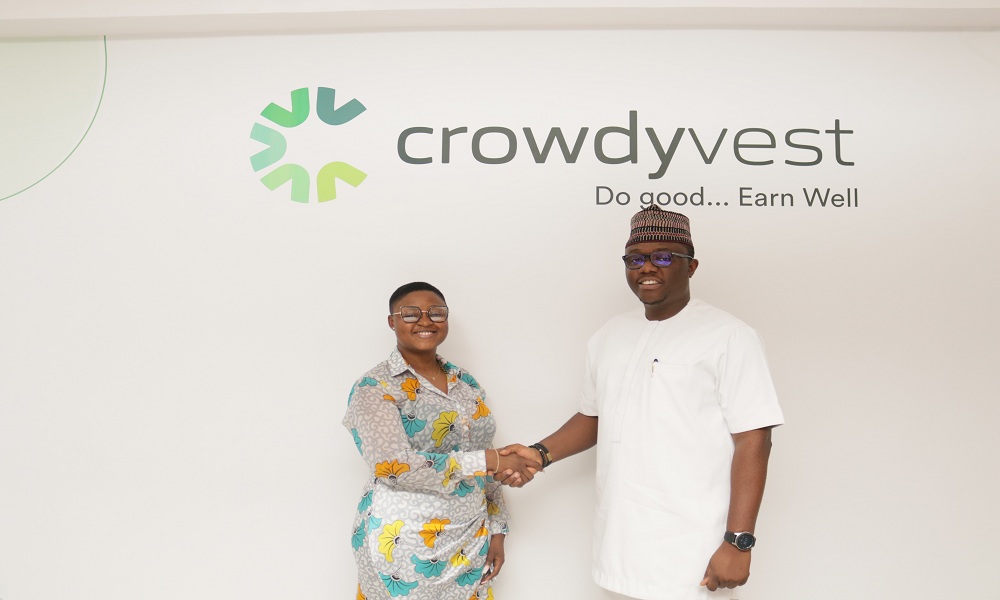 Farmcrowdy has in the past worked with Crowdyvest to crowdfund for farming projects.

Following this change, Farmcrowdy now fully exits the crowdfunding space with this sale and Crowdyvest will begin to operate a closed-community model for savings.

This new savings platform has been introduced with three new products. These platforms have been properly tailored to fit all categories of individuals, including the Millenials, Gen Z, Gen X, and Baby Boomers, and each of these products has its unique features and benefits. They are; Flex Savings, Vault Savings, and Pace Savings.

The company said in a statement that every saver enjoys the benefits of high-interest rates from 12.5% to 15%, zero bank charges, plans tailored for everyone, and effective and prompt customer service. 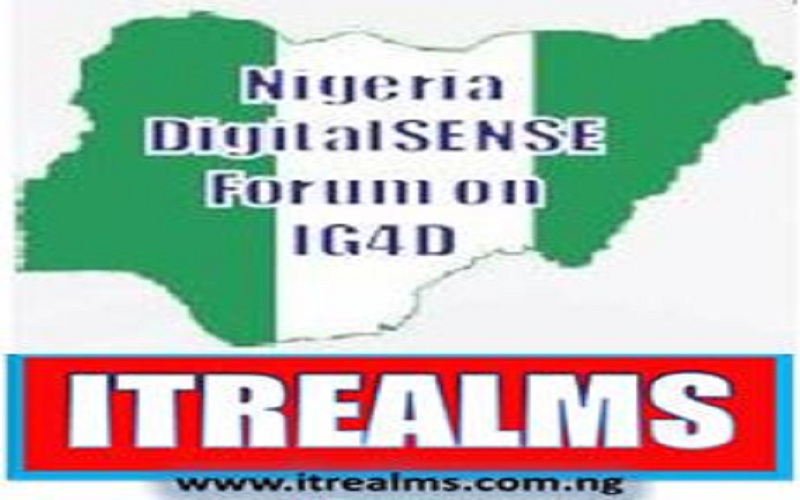 ITREALMS Media, organizers of the annual Nigeria DigitalSENSE Forum series, has unveiled the date for this year’s edition.

Editor-in-Chief/Lead Consulting Strategist at ITREALMS Media, Mr. Remmy Nweke, who disclosed this at the weekend, said the management has approved Thursday, June 10, 2021, as the date for the yearly NDSF which borders on Internet Governance for Development (IG4D) and Nigeria IPv6 Roundtable respectively.

He also revealed that the main theme for 2021 is ‘Digital Cooperation: Enhancing Multistakeholder Governance for Digital Economy.’

According to Nweke, nowadays, a paradigm shift has shown that the digital era brought inconceivable benefits alongside many challenges not limited to growing digital divides, cyber threats, and human rights violations more so, online.

“In order to lay a roadmap for the Nigerian stakeholders towards improving what has become digital cooperation, ITREALMS Media, through its digital rights initiative of the annual Nigeria DigitalSENSE Forum (NDSF) series will be exploring the theme for safer, equitable world with positive future on Thursday, June 10 by 9 am at the Welcome Centre Hotels, International Airport Road, Ikeja, Lagos,” Nweke said in a statement.

The Nigeria DigitalSENSE Forum series is organised by ITREALMS Media and hosted under DigitalSENSE Africa (DSA), an At-Large Structure certified by the Internet Corporation for Assigned Names and Numbers (ICANN), in collaboration with critical stakeholders including regulators in the Information and Communication Technologies.

Nweke added that the Director of Publications at ITREALMS Media, Mrs Nkem Nweke would anchor by noon of the same day the Nigeria IPV6 Roundtable on ‘Scaling up IPv6 in a post-COVID-19 pandemic.’

He called on industry players to leverage this opportunity and take an active part in this year’s edition so as to form the digital cooperation required for the digital economy to thrive.