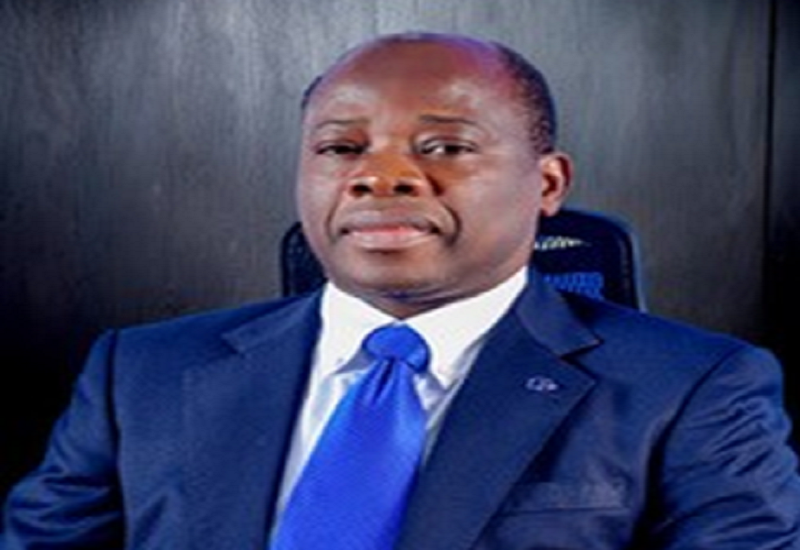 James Agada, the founder of Ixzdore Laboratories Limited, will on Wednesday, November 09, 2022, deliver the keynote address at the Africa Tech Alliance Forum 2022 (AfriTECH2.0).

The AfriTECH 2.0 will be held at Oriental Hotel, Lekki Road, Lagos, starting by 9:00 am under the theme: ‘Sustainability and The Company of the Future’

He was previously the CEO of CWG Plc formerly known as Computer Warehouse Group (CWG) Plc.

Prior to his appointment as CWG Plc’s MD/CEO, James Agada was the Chief Technology Oﬃcer of the Company and was also in charge of the Company’s Research and Development unit.

James Agada is a well-regarded, innovative, and versatile technology expert. He holds a First-Class Bachelor’s Degree and a Master’s Degree in Electronic Engineering, with a specialization in Digital Systems, from the University of Nigeria, Nsukka.

He also holds an MBA from the International Graduate School of Management (IESE), Navara, Spain.

James has had experience in consulting, software development, implementation and support. He was pro-term president, the Lagos Chapter of the Nigeria Computer Society, and was conferred with the “Titans of Tech Merit Award” in 2013 by Technology Africa.

He has also won several awards and recognitions from reputable bodies like Success Circle Africa for Entrepreneurial Excellence, Tech TV for Commitment to Development in ICT, AMLE’s 2016 winner of the ICT Personality Leadership Prize to mention a few.

Agada retired as CEO of CWG Plc at the end of 2018 and has been working as a writer, consultant, researcher, and investor.

He is also a published poet and has an online poetry collection at https://agadapoetry.blogspot.com

He is an ardent reader of all forms of literature, always seeking for best methods of applying technology, and spends a good deal of time writing articles to form help shape the minds of young entrepreneurs, towards thinking of applicable solutions that enable growth rather than wallow in the problems that abound.

Participation at AfriTECH 2.0 is FREE, but you are required to register using this link: https://registration.africatechallianceforum.africa/ 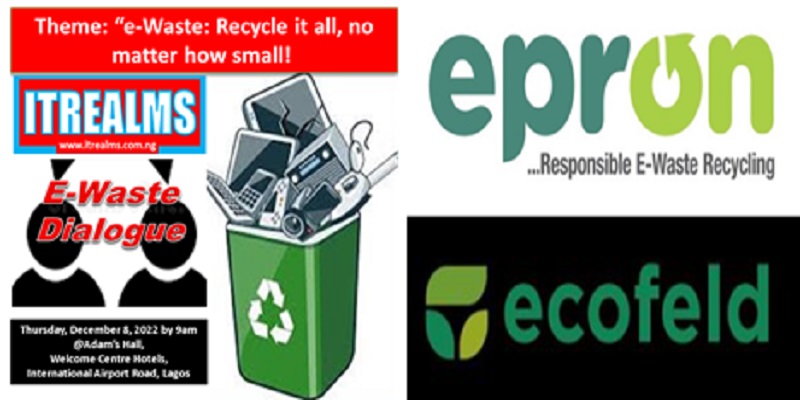 The management of ITREALMS Media is partnering E-waste Producer Responsibility Organization of Nigeria (EPRON) and Ecofeld Nigeria Limited, for a day-long collection scheme of small electronic waste on Thursday, December 8, 2022.

The event is part of the activities marking the 2022 ITREALMS E-Waste Dialogue in commemoration of the 2022 International E-Waste Day (IEWD) with the theme “e-Waste: Recycling it all! No matter how small” billed to hold at Welcome Centre Hotels, International Airport Road, Lagos.

Group Executive Editor, ITREALMS Media, the organisers of the 2022 ITREALMS E-Waste Dialogue, Mr. Remmy Nweke, who disclosed this, encouraged mobile device enthusiasts to come along with their devices that have reached their end-of-life to the venue for proper disposition by professionals who would also be on ground to address some topical issues.

He said, the collection of small electronic wastes especially mobile phones and like-devices, would be carried out by EPRON member organisation, Ecofeld Nigeria Limited as facilitated by ITREALMS Media group as part of this year’s ITREALMS E-Waste Dialogue on Thursday, December 8.

The exercise, he also said, would commence at Welcome Centre Hotel by 9 am till the close of work hours the same day.

Nweke revealed that the collection of small e-waste items would include mobile phones, pointers mouse, earpieces, rechargeable torches, and phone chargers, to name a few.

He further said that this initiative has become expedient because some people may have missed the earlier opportunity in October and since this awareness on e-Waste has to be continuous, ITREALMS came up with this scheme.

Nweke enjoined Nigerians especially mobile phone users to leverage the opportunity in disposing of their mobile devices they no longer use, of course in exchange for a voucher or gift item.

Reacting to the collaboration, EPRON Executive Secretary, Mrs. Ibukun Faluyi, described the initiative as a great idea, capable of deepening the collection of end-of-life devices for proper disposition.

She also urged Nigerians to take advantage of this opportunity being made available by ITREALMS Media.

Meanwhile, the Director-General of the National Environmental Standards and Regulations Enforcement Agency (NESREA), Prof. Aliyu Jauro, has been confirmed as the keynote speaker at the 2022 ITREALMS E-Waste Dialogue slated for Thursday, December 8, in Lagos.

–To Power Global Payments With Its Regulated Blockchain Network
–Zone becomes Africa’s first Layer-1 Blockchain infrastructure and protocol with a focus on enabling payments and acceptance of digital currencies. 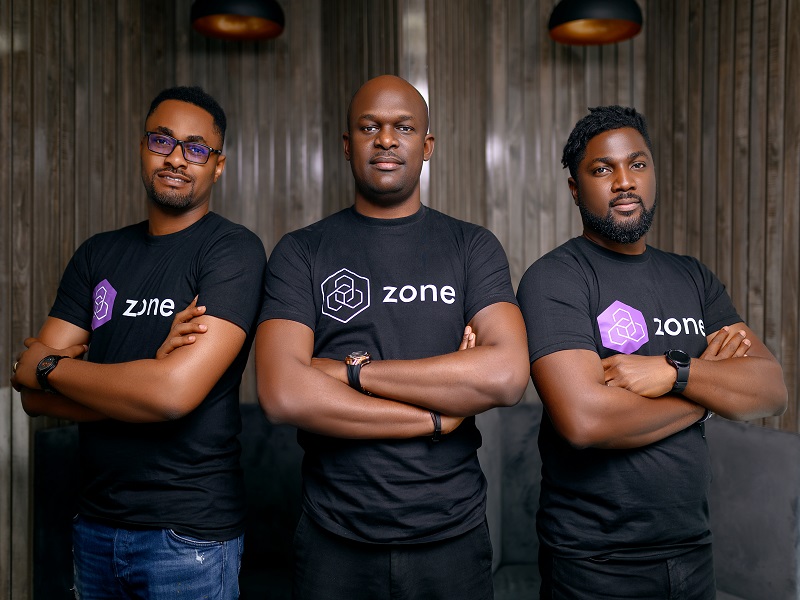 As part of its evolution, Appzone is pivoting from its cloud-based SaaS infrastructure to offer payments processing services that support both fiat money and digital currencies, with the intention to enable a hybrid interim period in finance where TradFi and DeFi will coexist seamlessly.

In the case of fiat payments, Zone connects some of Africa’s most prominent Banks and Fintechs within and across countries and utilises a native stable coin to provide real-time settlement for cross-border transactions.

In 2022, Zone was issued a ‘payment Switching and Processing Licence’ by the Central Bank of Nigeria, making it the first payment infrastructure company based on Blockchain to be licensed in Africa.

Following the rebrand, Appzone’s Banking-as-a-Service business has been carved into a separate standalone company, known as Qore, so it can continue serving existing clients and growing the SaaS platform’s reach.

This new standalone business will be led by some members of its elite leadership team, including Emeka Emetarom, Co-founder & Executive Director of Appzone and Mudiaga Umukoro, Co-founder & CEO of Appzone’s subsidiary, Appzone Core.

Speaking on the rebrand, Zone Co-founder and CEO Obi Emetarom said, “We have led Africa’s fintech sector in global firsts for over a decade. At Appzone, we launched the first core banking and omnichannel software on the cloud as well as the first multi-bank direct debit service based on single global mandates.

“With this transition to Zone, we are utilising the power of blockchain technology to connect every monetary store of value and enable reliable, frictionless, and universally interoperable payments. In doing this, we are building one global network to pay anyone through any means, in any currency, which will ultimately maximise financial inclusion and accelerate economic prosperity for Africa and the rest of the world.”

Co-founder and CTO for Zone, Wale Onawunmi, added, “At Zone, we’ve always been early adopters of innovative technology with the potential to transform industries – in this case, the finance industry.

“Our next-generation decentralised payment technology, which is the first of its kind, will challenge the status quo and become the future of payments for the world. We are encouraged by the pace of adoption we have seen so far and remain passionate about enabling financial services providers to reach their full potential.”

According to the United Nations, Africa’s population will grow to approximately 1.7 billion in 2030, with a potential for $91 billion in cross-border payments and a retail value of over $1.5 trillion.

But at an $8.97 fee per transaction, cross-border payment within sub-Saharan Africa still has one of the most expensive remittance structures. In addition, beneficiaries typically cannot have value delivered instantly to their Bank accounts or mobile wallets.

Zone’s Layer-1 blockchain network will allow payments initiated from one country in one currency to be received instantly in another country and currency at a fraction of prevailing costs.

Blockchain is a digital ledger of transactions that provides users with traceability and security without the need for middlemen. Using blockchain, Zone is working on completely digitising and decentralising payments, thereby paving the way for a cashless society where payments transcend borders.

Formerly known as Appzone, the Google for Startups Accelerator alumnus, now known as Zone, is on a mission to connect every monetary store of value using blockchain.

-Now Most Certified Data Centre in Ghana
-With this new milestone, MDXi Appolonia becomes the leading data centre provider in Ghana with the top 4 certifications in the industry 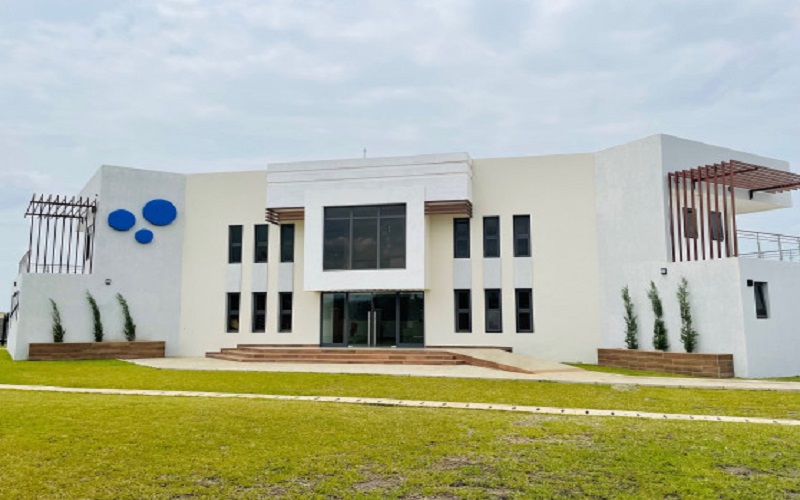 The MDXi Appolonia facility received this TCCF following onsite testing by the Uptime team and is a progression from the Tier Certification of Design Documents (TCCD) that was issued by uptime following the review of designs of the facility during construction.