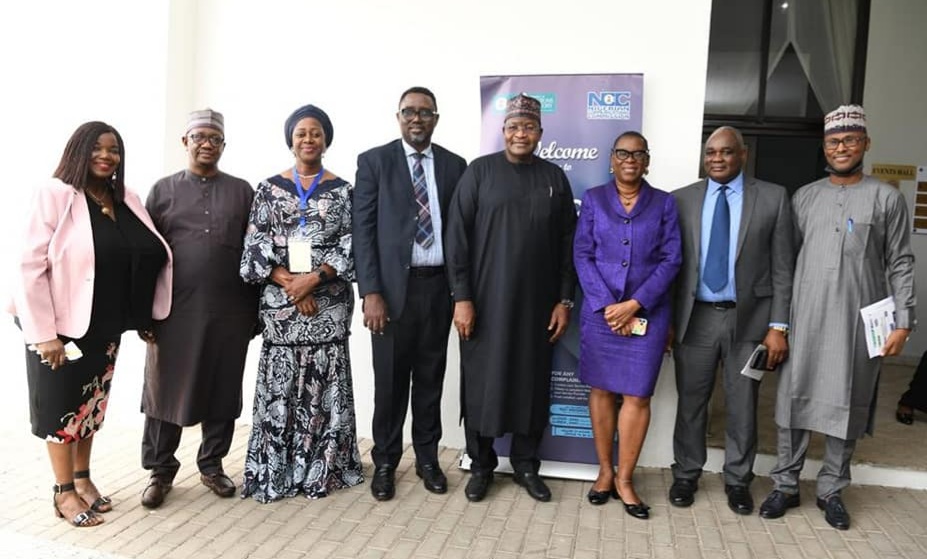 Prof. Umar Garba Danbatta, EVC of the NCC (5th from left) flanked by some Executive Management staff of the NCC at the event

Danbatta urged industry stakeholders to stand with the Commission to explore the prospects and potentials of the new technology, which is enormous.

The EVC, who spoke at the 90th Edition of the Telecom Consumer Parliament (TCP) hosted by the Consumer Affairs Bureau of the Commission, said the policy framework for the deployment has come into place and will facilitate deployment of services by the recent winners of the 3.5GHz spectrum auction, MTN Nigeria Communications Ltd and MAFAB Communications Ltd.

He said the Commission has set out the regulatory instruments needed for fast deployment of the new versatile technology for the benefit of the consumers and the stakeholders.

Danbatta, therefore, invited the support of all stakeholders to ensure that 5G technology is deployed in Nigeria in a manner beneficial to all telecom consumers and to support the emergent Digital Economy Policy of the Federal Government of Nigeria.

He highlighted the potential use cases for 5G networks as broadly categorised by the International Telecommunication Union (ITU) to include Enhanced Mobile broadband (eMBB), Massive Machine-type Communications (mMTC), as well as Ultra-reliable and Low-latency Communications (uLLC).

“We will continue to collaborate with stakeholders across sectors to ensure faster deployment of 5G services, and accelerate the growth of Nigeria’s broadband infrastructure,” he said.

He identified some challenges in the deployment to include limited frequencies with the required spectral efficiency, skilled professionals with requisite knowledge of the technology, fewer number of 5G-enabled devices, and cost of deployment but stated that the industry must work to turn the challenges into opportunities rather than seeing them as obstacles.

Prof. Danbatta said the issues that should militate against or slow down the deployment of 5G technology are themselves opportunities that can potentially create new revenue streams or new subsectors in the industry.

In the panel discussion on the presentation titled “5G Networks: Opportunities and Challenges” by Director, Technical Standards and Network Integrity, Bako Wakil, the Executive Commissioner, Stakeholder Management of NCC, Adeleke Adewolu, who chaired the panel session, urged all participants to exploit the opportunities offered by the 90th TCP to contribute to the deployment of 5G Network in Nigeria.

“We must conclude this Telecom Consumer Parliament with solutions to challenges that are associated with 5G deployment in countries that had deployed the services ahead of Nigeria.

“We must also have a clear roadmap on how the opportunities offered by the technology can be maximized for the benefit of Nigerians” Adewolu said.

Subscribers in South Africa, Nigeria and North African countries will increase adoption following the release of new spectrum, a trend triggered by the increasing use of high-bandwidth consumer applications and industrial use cases. 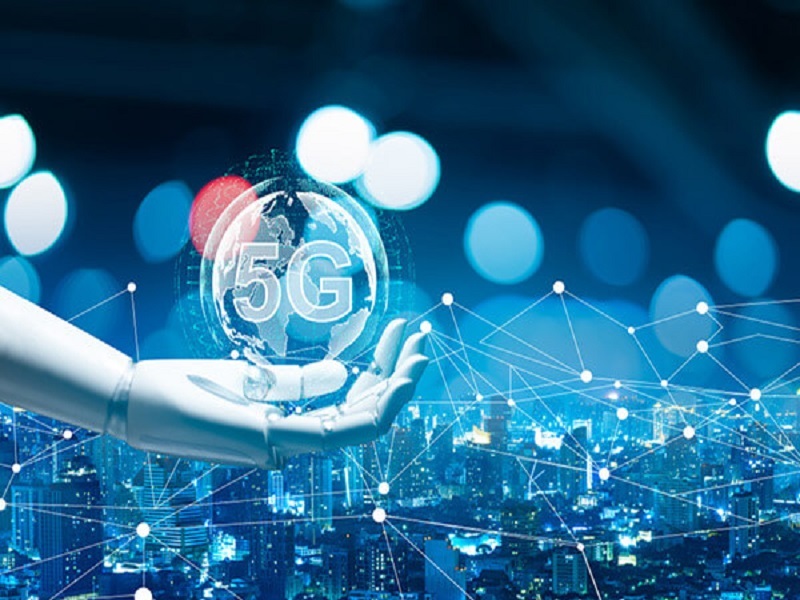 A Nokia research forecasts that 5G subscriptions will reach 263 million in the Middle East and Africa (MEA) region by 2026.

The 5G subscription growth will primarily be in Gulf Cooperation Council (GCC) countries, including Saudi Arabia, the UAE, Qatar, Oman, Kuwait and Bahrain.

This trend is triggered by the increasing use of high-bandwidth consumer applications and industrial use cases.

The report has been created based on Nokia’s intelligence, as well as data from third-party sources, GlobalData and Tutela.

In GCC countries, the 5G subscriber base is expected to reach 64 per cent of the total and data traffic likely to surpass 70 per cent by 2026, according to the study.

While 4G subscribers in the Southern Africa region are projected to reach 105 million (58 per cent of total subscribers) by 2026, 5G will contribute more than one-fifth of data traffic in the same time frame.

North African operators have seen a high demand for mobile broadband and the region is expected to have a 20 percent increase in total subscribers by 2026, compared to 2022.

In Central East West Africa, more than 60 per cent of the total data traffic is currently carried by 4G. This traffic is expected to grow four times over the next four years.

At the same time, 5G subscriptions are expected to account for nearly 10 per cent of the total mobile subscribers in this period.

The study also reveals that 5G and 4G together are expected to drive more than 90 per cent of data traffic in MEA. Total data traffic is expected to increase significantly in the next four years with a compound annual growth rate of 35 per cent. 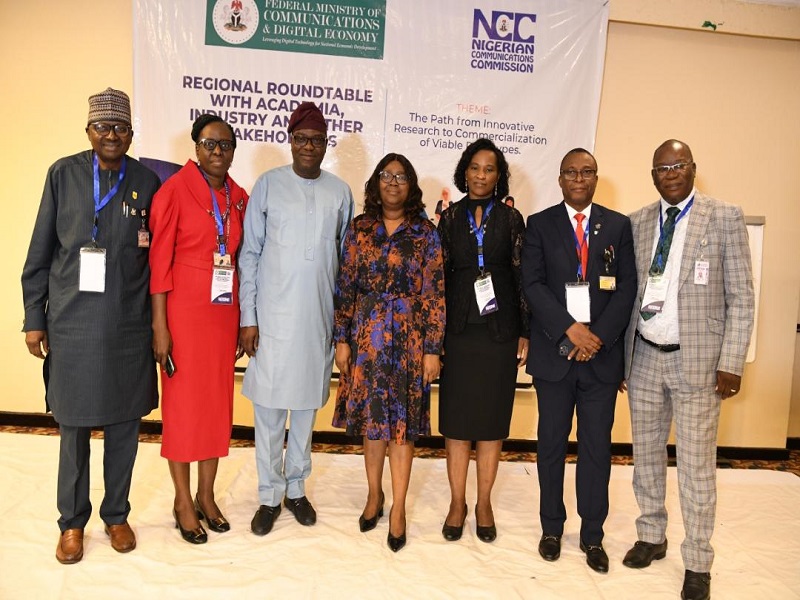 The Chairman, Board of the Nigerian Communications Commission (NCC), Prof. Adeolu Akande, has restated the commitment of the Commission to commit more funds to research and prototypes resulting from the Commission’s grants to academia.

This reassurance is coming on the heels of the recent revelation that the Commission has committed more than N500 million in funding research across Nigerian universities.

Addressing a gathering of vice-chancellors and professors from universities in the southern parts of the country at a roundtable conference at the Sheraton Hotel, Ikeja, Lagos, Akande said that the Commission acknowledges the importance of working with stakeholders to engender innovations and build indigenous technological capabilities that would strengthen the Information and Communications Technology (ICT) ecosystem.

“We want to use this opportunity to assure you that the Commission will continue to give support to the educational sector in the interest of national development. We will also continue to encourage research and innovation in Nigeria’s tertiary institutions.” Akande said.

He explained that the essence of the roundtable was to dialogue with the academia, industry and other stakeholders on how research efforts and prototypes can be transformed into commercially-viable products that solve real-life problems.

“Consequently, the Commission will continue to allocate the requisite resources to research, development and innovations necessary for the industry to continue to contribute to the socio-economic development of the country,” Akande further said.

Executive Vice Chairman of NCC, Prof. Umar Garba Danbatta, represented by the Director, Legal and Regulatory Services of the Commission, Josephine Amuwa, said academia is a key driver of innovation in all spheres of human endeavour.

He said this is why his leadership at the Commission is determined to not only give grants to the academia but also support the commercialisation of the prototypes developed to deepen the indigenous technological capabilities which would support the overall development of the industry.

NCC Executive Commissioner, Technical Services, Ubale Maska, who was represented by Director, Technical Standards and Network Integrity at the Commission, Bako Wakil, revealed that the Commission had, so far, awarded a total of 49 telecom-based research grants to the academia out of which 10 prototypes have been successfully developed.

“We are hopeful that these sessions will culminate in the development of a common framework that would facilitate the commercialisation of the existing prototypes and future research outcomes (prototypes) for the benefit of the economy and the industry,” he stated.

Coming shortly after a similar roundtable in Kano for the northern region, the event organised by the research prototypes and Development R&D Department of the Commission, was aimed at bringing together Resources persons, business savvy industry experts, the academia, relevant Ministries, Departments and Agencies (MDAs), entrepreneurs and renowned individuals who have successfully commercialised their inventions to brainstorm on the way forward for research output commercialisation.

The leading technology company is expanding broadband services to millions of homes across Nigeria. 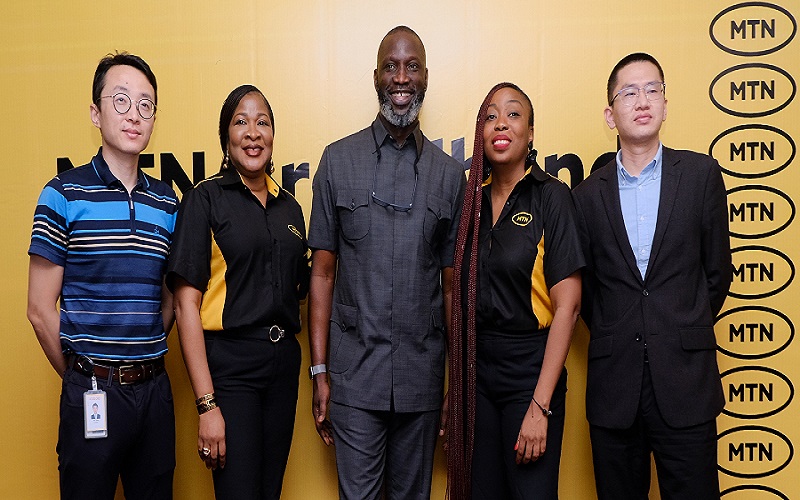 With this launch, MTN Home Broadband services will be available to millions of Nigerian households.

DigitalTimesNG can report that with over 200 million people, Nigeria currently boasts of approximately 44.3 per cent internet connectivity, whereas other African countries, such as South Africa, Egypt, and Kenya, are at 68, 74, and 48 per cent internet penetration, respectively.

On average, the internet accounts for almost four per cent of GDP across the large economies that make up 70 per cent of global GDP.

UNICEF also projects that nations with low broadband connectivity have the potential to realise up to 20 per cent GDP growth by connecting schools to the internet.

With MTN’s Fibre-to-the-Home (FTTH) and the latest Fixed Wireless Access (FWA) Home Broadband services, millions of Nigerian households, with approximately 50 per cent located in rural areas, will have access to reliable and ultra-fast broadband services.

This would enable them to enjoy unlimited data plans, the ability to connect multiple devices and share data across remote locations for online learning, working from home, streaming, gaming, and smart home solutions among others.